Suffering With Chronic Ear Infections or Ear Aches?
The Common Denominator May In Fact Be An Atlas Misalignment! 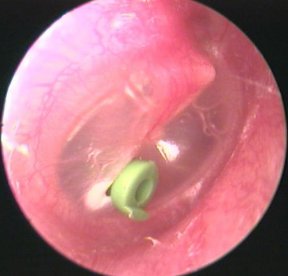 According to the Center of Disease Control (CDC), the American Academy of Family Physicians, and the American Academy of Pediatrics, ear infections with fluid build-up (otitis media with effusion) do not require the use of antibiotics. In fact, one study with 3,600 children found that the children who did not take antibiotics had a higher rate of recovery than those who did take antibiotics. Despite these clear guidelines, many pediatricians continue to prescribe unnecessary antibiotics for the treatment of ear infections. This error contributes to the development of antibiotic resistant bacteria. When antibiotics are not successful in treating ear infections or if a child has multiple infections, specialists often prescribe myringotomy and tympanostomy, more commonly known as “ear tubes.” During this surgical procedure, general anesthesia is used and a small opening is cut into the eardrum to place a tube inside. In most cases, the membrane pushes the tube out after a couple of months and the hole in the eardrum is closed with scar tissue. If the infection persists even after tube placement and rejection, the entire surgical procedure is performed again, or children may undergo adenoidectomy (surgical removal of the adenoids).

Unfortunately, most children who have this procedure have recurrent fluid build up (effusion) within two months, resulting in permanent structural damage to the tympanic membrane (ear drum) in 40% of the children who have had ear tubes. Ear tubes have even caused 25% of the children to suffer total hearing loss. It is amazing that in the face of this evidence, not to mention the risks and costs associated with antibiotics and surgery, ear tubes remain the treatment of choice in many medical practices.

According to the American Academy of Pediatrics, over five million children suffer from chronic ear infections, resulting in 30 million visits to doctors’ offices and over 10 million prescriptions of antibiotics each year. 50% of the antibiotics prescribed for preschoolers are for ear infections. Symptoms of ear infections may include mild discomfort, irritability, fever or severe pain. Almost half of all children will have at least one middle ear infection before they’re a year old, and two-thirds of them will have had at least one such infection by age three. Frequent ear infections are the second leading cause for surgery in children under two - right behind circumcision.

Anatomy of The Inner Ear

Before taking another round of maybe-they’ll-work-and-maybe-they-won’t antibiotics or undergoing a drastic procedure like surgery, consider Upper Cervical Chiropractic Care.   Upper Cervical Chiropractic is a viable, non-invasive way to help your child with chronic ear infections. One study shows that after receiving a series of upper cervical corrections, 80% of the children were free of ear infections. Upper Cervical Care enables the inner ear to open and drain which, in turn, allows the body to resist the build up of fluid and possible infection. Many children develop their own antibodies and recover quickly and naturally without the use of unnecessary antibiotics and tubes. The discomfort of chronic inner ear infections, lost days of schools for children, and lost days of work for parents can become a thing of the past.

SCHEDULE AN APPOINTMENT
Dr. Grayson Blom is a Boise, Idaho native that works with a nationwide group of Doctors expertly trained and specializing in the Upper Cervical procedure. Dr. Blom is also one of the few Doctors in the state of Idaho trained and certified in the Upper Cervical procedure.  We are dedicated to helping patients just like you who suffer from asthma symptoms, chronic headaches, migraines, neck pain, back pain and other spinal-related disorders.

And right now, our office is offering a COMPLIMENTARY CONSULTATION to determine if you are a candidate for Upper Cervical care.

Take the first step toward reclaiming your health…   Call our office directly (208) 559-0541 or fill out our consultation request form.