The Vitalistic Philosophy of Upper Cervical Chiropractic Care?
It Is In Fact A Vitalistic, Natural Approach To Healthcare! 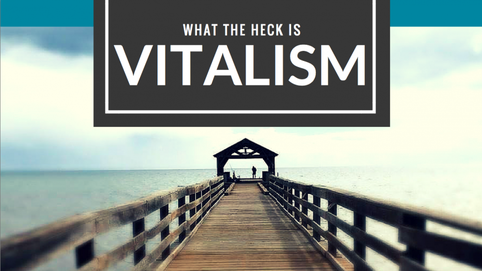 Whether you realize it or not, everybody has a philosophy. Our philosophy is our view on the world we live in and the WHY behind the decisions and actions that we make in life. Importantly, we can either examine our philosophy on any given subject and make it clear, or ignore it and be a slave to subconscious notions, false generalizations, or even other people's philosophies picked up throughout life.

Many professions have a philosophy as well. While some stand the test of time others must change to allow for new knowledge, beliefs or understandings. For instance, the legal system may enforce different laws in the 21st century than they did in the 19th to reflect our change in culture while the medical community will adopt new procedures and abandon others over time. In contrast, upper cervical doctors have held the same philosophy for over 100 years because it has consistently held true. Central to this philosophy is that there is an Intelligence that brings organization to all matter and maintains it in existence.

Today, as science expands into "new physics" and quantum mechanics, there is the realization that a Universal Intelligence exists in all things. Chiropractors smile at the notion that "science" is only now "discovering" this because after all, our entire profession was built around that simple, yet profound truth.

That conclusion leads directly to another one of the principles of chiropractic philosophy: A living thing has an inborn intelligence within its body, called Innate Intelligence. No word in chiropractic philosophy is as filled with meaning as the word "Innate," for it refers to the only element that sets living beings apart from nonliving things, and is the reason that chiropractic exists. The intelligence we're talking about is the "knowledge" that every living entity is born with, and which allows us to adapt to our environment and survive.

Researchers at Boston’s Forsyth Institute and at Harvard University have taken a big step toward explaining this mysterious something. When an embryo consists of just four cells, they have found, an electric gradient starts switching on genes. It’s like a power switch is turned on that begins to animate you to life. The study of embryological development shows that the brain is the very first organ to develop. The brain then sends creative power through the spinal cord and nerves to create every cell  and organ in your body. From that moment on, that brain power flow (Innate “Force” or Energy) continues to control all function and healing in the body for the rest of that person’s life. As a result, if there is any interference or damage to the spinal cord and nervous system, there will be an interruption with that life power and your organs will begin to malfunction.

In nature, matter remains lifeless until energy is applied. The air and water remains stagnant until energy is applied, only then do we have wind and waves. It is exactly the same in the human body as well. The Innate Intelligence cannot control or coordinate matter without energy. The muscles cannot expand or contract in accordance with the instructions of Innate Intelligence unless energy is present. In fact, in the absence of Innate Energy, the body ceases to function – ceases to live. Innate Energy, then, serves as the VITAL link that enables the Intelligence to express itself through Matter (the body). The three elements, taken together, form the Triune of Life, one of the most important concepts in upper cervical chiropractic philosophy. The brain generates, or converts electrical impulses, which will spur the individual cells to adapt to the current needs of the body. Those impulses are propelled along a complex system of nerves that connect the brain to the organs, tissues, glands, and cells of the body. Think of the nerve system as a thick cable, made of numerous individual wires bundled together. When this nerve "cable" exits the brain, it travels down the spine, protected by a flexible bony structure. As it progresses downward, sections of the cable separate and pass through small openings between the spinal bones (vertebrae). Later, they separate further until each individual wire connects with its designated target.

Most people don’t understand that this brain to body communication can be altered by a misalignment within one of the top two bones in the neck. A misalignment in this area can "impinge" on the brain stem and decrease or distort the normal flow of Innate Energy through the body. The result is similar to putting a kink in a water hose; the water still flows through the hose, but not at full strength. This situation can interfere with the 100% expression of intelligence through 100% energy and the body is said to be in "dis-ease". This should not be confused with the term disease, which refers to specific conditions that medical doctors   diagnose, name, and treat.  The upper cervical term "dis-ease" refers to a situation where there is less than 100% expression of Innate Intelligence. Since everybody is different and every bodily change can have many different ramifications, upper cervical doctors do not become involved in the futile exercise of labeling a condition or trying to administer drugs or therapy to treat its symptoms. Upper Cervical Care goes to the root of the problem and works to restore the body's ability to reach 100% expression of its Innate Intelligence. It does this by finding and removing any misalignment that might interfere with the flow of Innate Energy. Once that flow is restored, the body will resume its natural striving for  optimum health.

The working of the Triune of Life – Innate Intelligence, Innate Energy, and Innate Matter – is the supreme accomplishment of Universal Intelligence. No one can be so arrogant to think that its design can be improved upon. Upper cervical doctors don't attempt such a task. Instead, they focus their efforts on permitting that design to function as it was meant to – without interference.

Upper Cervical Care Is A Vitalistic Approach To Healthcare

Upper Cervical Care is considered a “vitalistic” approach to health and differs from “mechanistic” approach of medicine in a number of ways. While conventional medicine truly excels at crisis care, it fails when it comes to health care (actually keeping healthy people well). In fact, the United States represents only 5% of the world’s population yet we consume nearly 75% of all prescription drugs manufactured. If this traditional, western “mechanistic” approach to healthcare were the answer, wouldn’t the USA rank head and shoulders above the rest of the world in overall health? Suprisingly, the World Health Organization (WHO) concluded that the United States ranked 40th in overall health (below some third world countries).

1. Vitalistic care focuses on naturally supporting and enhancing overall normal body function rather than the chemical alteration of symptoms with drugs.

2. Vitalistic approaches recognize that the body has the inherent wisdom to function normally and that physical, emotional and chemical stressors may overload the body’s ability to do so. The goal is to remove these stressors, allowing the body to return to normal. The three major stressors to our nerve system function: physical, emotional and chemical. Upper Cervical Doctors often call them the Three T’s: traumas, thoughts and toxins. An overload of any of these stressors has a major impact on nerve system function via spinal misalignment. Upper Cervical misalignment causes distress to the central nervous system and can therefore affect normal nerve activity and function throughout the entire body. Spinal misalignment also causes a decrease in normal spinal movement, and this, too, has a great impact on nerve system function.

3. Symptoms are recognized as the body’s alarm that reveals a problem or crisis. From the vitalistic perspective, it is not important to label the condition, and it is considered counterproductive to silence these symptoms or alarms with drugs.

4. Vitalistic care is not the diagnosis or treatment of conditions and diseases. Rather, it is a process of identifying and eliminating the cause of nerve system interference. Only when this has been eliminated can a person experience wellness.

5. Finally, the vitalistic approach is encouraged before symptoms even appear. In the case of wellness care, upper cervical checks are encouraged to enhance nerve system function and overall health, with or without symptoms.

Take the first step toward reclaiming your health…  Call our office (208) 559-0541 or fill out a consult request form.
SCHEDULE AN APPOINTMENT