figure 1: Normal vs Chiari Malformation.
Many Chiari malformation treatments focus ONLY on covering up your symptoms.  Is it possible that the most commonly overlooked cause of the problem is an old injury to the upper cervical spinal column?

Why Is Chiari Malformation So Hard To Diagnose? 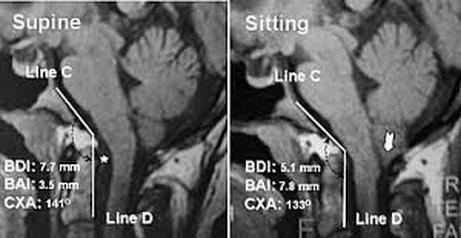 figure 2: Chiar malformation properly documented in Sitting postion vs Supine postion.
The most commonly missed clue is the fact that most MRI units that would be used to diagnose this condition are recumbent machines in that you must lay down, face up (supine) and when you lay down the cerebellum and/or brain stem will very likely slide back into the skull and the imaging radiologist will completely miss the problem. (see figure 2)

It is also important to note that the symptoms of Chiari malformation are very similar to other common complaints people have, thus making it even harder to medically diagnose.  The most common symptoms Chiari patients experience are neck pain, headache, vertigo (dizziness), balance problems, tinnitus, hearing loss, visual disturbance, nausea, insomnia, depression, numbness in arms or legs (ref 2,3).  These are very common symptoms people seek Upper Cervical Chiropractic care for!!

How Do Chiari Symptoms Match Up With Brain Stem Cord Pressure?

When we look at the most common symptoms of Chiari malformation syndrome and how they match up to brain stem and upper cervical spinal structures it is apparent how they overlap.  For example the symptoms of neck pain and headache are very common and most frequently occur due to spinal misalignment in the upper neck creating spinal compensations in the lower neck and the spinal column below to produce neck pain and back pain. In addition a spinal misalignment in the upper neck can also interfere with how blood and cerebrospinal fluid (CSF) flow in and out of the head to produce headache symptoms or we could say superior brain congestion and inferior body compensation.

When we look at symptoms such as vertigo (dizziness), balance problems, hearing loss, tinnitus using (figure 3 and 4) you can match up the cranial nerves affected (in addition to the cerebellum which assists in co-ordinating balance).  The 8th cranial nerve is being mashed into the foramen magnum and the upper cervical spine. This finding is significant as the 8th cranial nerve is what controls hearing and balance.  The apparent relationship of brainstem structures to upper cervical spinal structures is quite remarkable. Is it possible there is a relationship to upper cervical spinal injury and the development of Chiari malformation symptoms?

What about Nausea? This can occur with irritation to cranial nerves 9 and 10.  Again study (figure 3 and 4), the close proximity of these cranial nerves that match up for a cause and effect situation etc. Please also keep in mind the exact placement of these cranial nerve structures can vary as well.  As a general rule things seen in an anatomy textbook only occur 30% of the time which means 70% of the time people will have some variation from what is considered textbook anatomy.  The bottom line is that any portion of the nervous system that is under tension or compressed in any way will result in some form of dysfunction!

So what is it that TRIGGERS Chiari malformation symptoms? If you read the description of the different classifications of Chiari malformation (ref 1) keeping in mind that connective tissue HAS TO BE TORN LOOSE for these structures to move like this.  In (figure 1 - Sitting) you can visualize how the connective tissues of the Chiari patient above have been TORN LOOSE allowing the brain stem and cerebellum to be pulled down into the foramen magnum and the upper cervical spinal column when the patient is upright in the field of gravity.

The most common CAUSE of Subluxation is a previous injury to the head or neck such as:  a hard slip or a fall, a motor vehicle accident, a sport injury etc.  A Subluxation occurs when the connective tissues that hold the upper cervical spine together are torn loose allowing one of the upper two neck bones to misalign and lock out into a stressed position.  The brain stem exits the floor of the skull in this area and ends near the top two neck bones.  Could a Subluxation interfere with blood flow and cerebrospinal fluid (CSF) in and out of the head?(ref. 4,5,6,7,8)  According to research it can in fact do so! Could a Subluxation interfere with how the brain talks back and forth with the body?(ref. 9,10.) According to research it can in fact do so!

In virtually all cases the average time it takes for symptoms of a Subluxation to start showing up is 10-15 years and in many cases even longer than that.  In many cases damage to the spine can be dated to give us an approximation of when the Subluxation began.  It is amazing how often this matches up with a previous injury the patient sustained in the years prior, which is just now producing symptoms.

Upper Cervical Care For The Correction of Subluxation

Upper Cervical Chiropractic care is a systematic approach to locate, and correct injuries to the upper neck.  This is achieved by a procedure that is designed to 1. determine the nature and extent of the spinal injury, 2. determine disruption to nervous system function using a form of thermography, 3. determine how long the spinal injury has been present and the prospects for correction.

It is important to also note that Subluxation is not the only way Chiari malformation symptoms can develop, please consider a space occupying mass such as cancer in the form of a tumor et. al.  With that said the most commonly overlooked source of these problems is in fact due to a Subluxation.  The bottom line is that a Subluxation is a neuro-vascular-degenerative disorder that interferes with the nervous systems ability to communicate back and forth with the body and therefore produces some sort of dysfunction.  What type of problem develops from a Subluxation depends on a several different factors such as:  1. the nature and extent of the spinal injury,  2. how long has the injury been present?,  3. most importantly the patients unique anatomy in the upper cervical spinal area.  As an example it is known that there are over 83 different variations of how the blood flows in and out of the head.  It is common knowledge that whatever structures in the body don't get enough blood, will not function properly.  It is also common knowledge that a small amount of pressure or irritation to the brain stem or spinal cord can cause neurological dysfunction.

Dr. Grayson Blom works with a nationwide group of Doctors expertly trained and specializing in the Upper Cervical Procedure.  Dr. Blom is also one of the few Doctors in the state of Idaho trained and certified in the Upper Cervical Procedure. We are dedicated to helping patients just like you who suffer from chiari malformation symptoms, chronic headaches, migraines, neck pain, shoulder pain, back pain and other spinal-related disorders.

Take the first step toward reclaiming your health…  Call our office directly (208) 559-0541 or fill out a consult request form.
SCHEDULE AN APPOINTMENT